It’s only been a few months, and I am a different person (in a good way or bad way? will find out….)

As mentioned in my first post here, I am totally new in this Beauty world. It’s only been a few months, I have already bought so much (according to my standard!), and it’s not stopping!

First, I started to buy products that were recommended by Lisa Eldridge, then I started to read a lot online, and now my wish list is expanding everyday! (I wish my salary is increasing in the same way!!)

Anyway, I would like to share what I bought in the last few months, I have been trying to limit myself to one purchase after payday, but it’s not easy!

May’s tiny haul
At the beginning of May, I bought a conditioning cleansing lotion and facial exfoliator, and they sent me the facial wash for free♥♥ 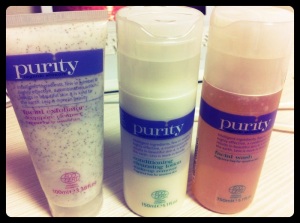 I patiently waited until I got my paycheck in June, then I ordered these from feelunique.com, they have really good price and free international shipping!! However, when the product came Phyto hair cream looked so different from the picture, so for a moment I thought they sent the wrong order, but then they responded quickly said it’s the same product, just not yet updated the picture on their website.

I have been using Etude house’s BB cream for a few years now, as for my concealer, the coverage is just not enough to cover my under eye dark circle, then I saw Lisa’s acne video and was amazed by the coverage Vichy Dermablend has. My friend bought it in HK, and she really liked it…so I got one for myself too ♥

This time I ordered from lifeandlooks.com, their shipping is not free but very reasonable! And their prices are amazing!!!

I bought these, and they finally arrived today! I am so exciting, coz I’ll be trying it in a little while~~

Some products I bought in Japan

Since I will be traveling to Hawaii soon, so I won’t be buying anything expensive in Japan, since it would be a lot cheaper in the US. BUT…walking pass japanese drug stores everyday, it really is difficult to resist the temptation. So I was being very careful, I should only buy the products that are only available in Japan, or if it is cheaper in Japan!

Not at the same time, but over the last few months I bought…

1) Shiseido foundation brush – it has a lot of great reviews, and when I saw it, it was on discount, so I bought it!

2) Soft Stone deodorant – I have been using secret for so many years, however recently it gave me really bad irritation, so I guess it was time to change. And this soft stone received really high customer satisfaction in Japan. So I decided to give it a try.

3) Ducato nail polish in Strawberry – The color is just so pretty I couldn’t resist.

5) Marie Claire – Top Stage makeup base in blue – I was in need of something that could tone down the redness undereye, after some research I found the price of this one to be very reasonable (according to Japanese standard) so i gave it a try! A review is definitely on the way!

6) Mascara comb – I saw a video on Youtube “new way to apply mascara”, so I decided to try the new method, but didn’t really work for me.

7) From Japanese auction site, I found someone is selling Eylure Party Perfect lashes and Nail Rock’s nail wraps for a really cheap price! How could i miss it! 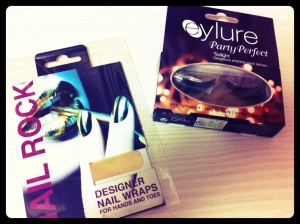 I really wish I could do reviews for all the products I bought, it’s coming! Definitely on my to-do list~ So stay tuned♥!

P.S. The little robot in the picture is my friend – Bo, you’ll be seeing her in my blog a lot I think!

2 thoughts on “Beauty is addicting…I am already addicted”